I admit to being a little gobstopped by Nicholas Negroponte’s announcment in the Guardian that the next generation OLPC will be Open Hardware is a pretty big deal.  I picked up the announcement this morning from Make Magazine editor, Phil Torrone’s twitter feed in which he says “This is pretty much the biggest news of 2009”.  For the maker, tinkerer, hardware hacker world, this might just be true.

In the article, Negroponte says:

One important thing about the XO-2 is that we’re going to do it as an open source hardware programme. The XO-1 was really designed as if we were Apple. The XO-2 will be designed as if we were Google – we’ll want people to copy it. We’ll make the constituent parts available. We’ll try and get it out there using the exact opposite approach that we did with the XO-1. 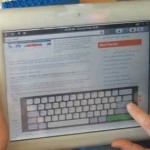 Previously my chief criticism of the OLPC was their failure to open up their hardware design.  The news that they are going to publish and freely share the hardware design of the constituent parts opens up a host of possibilities.  You may have read recently about TechCrunch’s very cool Open Hardware Crunchpad (pictured at right).  How remarkable would it be if you could start to mash up screens, power supplies, wireless capacity from a variety of sources to make your own low-cost device.  Negroponte is quite specific, he says “everything from the dual display to the touch-sensitive, force-feedback, haptic keyboard will be available.”  So, your mashed up version might look like a laptop or a book (as the XO-2 is intended to) or something completely different.

Hardware is a lot more adaptable than it used to be.  Opening up the hardware components mean that we are not just sitting at the restaurant table waiting for our order, now we can get busy in the kitchen.  Here’s to open hardware kitchens in Africa, in South America, in Asia developing their own tasty  recipes.  Opening up the OLPC hardware design opens up the potential for innovation.