In April of the last year, Indian telecoms giant Airtel bought Zain‘s mobile operations across 16 countries in Africa.  But it was in Kenya that Airtel decided to launch its first competitive offensive in August of last year, slashing mobile costs by up to 70%.  Safaricom held out for a couple of weeks but ultimately was obliged to follow suit.

Well here we are 6 months later and how have things turned out?  If you read the Balancing Act this week, you would have seen an interview with Safaricom CEO, Bob Collymore, in which he talks about the mobile price war in Kenya.  The paragraph that leapt out at me immediately was this one:

”We have 77% of the market by subscriber numbers. Our ARPU is higher than anyone else’s. But 77% market share is not sustainable. We do have “significant market power” but we feel that’s because everyone else was very incompetent. There was no consistent management at the number two operator. We’re OK with losing market share (faced with unrealistically low rates) and focusing on Nairobi and high-income communities. The people in remote districts are receiving calls (more than making them). If rates decline, why should I continue to do that?” [emphasis added] 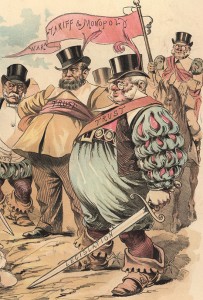 I had to sit down and digest this for a minute. Bob Collymore is threatening to neglect rural areas if the regulator doesn’t do something to force prices up.  I am speechless that he can casually say this sort of thing and get away without massive public outcry or government censure.  Let’s go over a few facts.

First Safaricom. This is a company that for the last few years has been making nearly 50% gross profit on their business. Heaven forfend that they should have to lose any of that revenue.   They command 77% of the mobile market and 92% of the Internet market.  They argue that this is due to the incompetence of their competitors which is partly true but largely disingenuous as beyond a certain size, network effects have helped to entrench their market position.

Now Kenya.  In spite of being a pretty amazing country in general and in spite of the incredible mobile/Internet buzz in Nairobi at the moment, this is a country of enormous economic disparities where roughly 50% of the country’s population falls under the poverty line, meaning they earn 20USD per month or less.  Eighty percent of the population live in rural areas and that includes three out of four poor people.  We know from ResearchICTAfrica‘s research that, as of 2008, within the bottom 75% percentage of earners, Kenyans are spending more than 25% of their TOTAL income on mobile services.  Now that’s only USD5 per month but if you’re earning USD20 per month that’s a pretty big deal.  Almost unbelievable.  Now think of the impact that the recent price drops have had on the rural poor.  A 70% price drop means getting back a pretty big chunk of your income.

But not if Bob Collymore has his way.  He wants prices up or he’ll let rural access atrophy.

I have a modest proposal for Safaricom.  If they are not prepared to service rural areas, let someone else do it.  Allow entrepreneurs access to GSM spectrum in rural areas if they can make a viable case for service delivery.  In this case, I am thinking of Range Networks, makers of OpenBTS, a low-cost, open source, GSM basestation.  Give Range Networks a chance to build a rural network in one of those areas you’re not so interested in anymore and perhaps allow a beautiful partnership to emerge.  You have little to lose if they fail but if they succeed, you have a network busy sending you minutes and paying to sub-let spectrum from you.

Naturally I also encourage entrepreneurs to explore the use of unlicensed spectrum as well.  My own social enterprise, the Village Telco, produces low-cost mesh WiFi devices (Mesh Potatoes) that can be used to establish a telephone/Internet network anywhere.  I wrote a post over at ICTWorks looking at the similarities and differences between the two projects.

Both OpenBTS and the Village Telco are built on the premise that anyone with the energy and expertise to build a telephone network should be allowed to.  Isn’t that the way it should be?

Addendum:  I’ve just noticed that Erik Hersman has been struck by the same quotation from Bob Collymore and has been kind enough to write about the Village Telco.