Race for the South Atlantic

One of the less professional sounding quotes from me in the media in the last few months is the one to the right where I introduce the technical terms “bananas” into the undersea cable capacity discussions. For the record a banana is about 10 terabits/s. No, not really… One might be forgiven for thinking that the end of the African undersea cables had come for the time being, that no one in their right mind would announce more undersea cables. I have thought this a number of times in the last couple of years. You would be forgiven but you would be wrong. 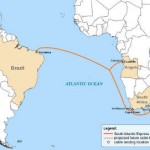 The next frontier apparently in the African undersea cables stakes is the race to connect Africa with Brazil.  First out of the blocks in the race was the South Atlantic Express (SAEx) cable which proposes to join Melkbosstrand, South Africa to Fortaleza, Brazil.  The cable is a partnership between eFive Telecoms in South Africa and Globenet in Brazil.  Globenet is the undersea cable subsidiary of Oi, the largest telecom company in Brazil.  Only today, eFive CEO, Rosalind Thomas, announced that eFive was on track and would be live within two years.  One thing that seems a little fuzzy about SAEx is whether the spur to Luanda is part of Phase One of the cable or just a spur.  In the early days of this initiative, eFive were negotiating with the Angolan government but that seems to have gone by the board.  You’ll see why later. 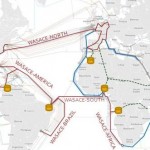 The next cable to be announced was the WASACE cable.  WASACE is a massive project to connect the Americas with Africa and Europe.  The capacity they are proposing is vast as well.  This cable also proposed to connect Melkbosstrand with Fortaleza but via Luanda and Lagos.  So while SAEx takes a more direct and less expensive route directly across the South Atlantic, WASACE follows the route that WACS and ACE plan to take up the West Coast.

While we’re on the subject of the ACE cable, ACE’s partner Baharicom has been conspicuous by their silence in the last year.  Baharicom are responsible for the ACE landings south of Sao Tome.  There has been no news of landings and no announcement of a South African landing partner.  They don’t even have a website.  My guess is that the southern leg of ACE either needs a new partner or is unlikely to materialise.  That’s good news for WASACE and even possibly for MainOne and Seacom who at various times have talked about a cable to connect their cables.

Finally, as if that wasn’t already all you needed for a completely undersea cable soap opera, there was news from Telebras.  Telebras was the Brazilian state-owned monopoly telco that was broken up in 1998.  It has recently been resuscitated by the Brazilian government as the chief implementer of their National Broadband Plan.  In December 2011, they announced the signing of an agreement with Angola Cables, a joint venture between the Angolan government through Angola Telecoms and a number of private operators.  Interesting here that the partners at either end of the cable are different from the SAEx cable.

So there you have it.  Three cable initiatives apparently.  Who will be first?

Already the sense of real demand for even one Brazil-Africa undersea cable seems speculative.  Three seems completely out-of-order.  I can seen the demand from the Brazilian perspective wanting an alternative global route with virtually all of their bandwidth to Europe being forced to go through the United States.  For Africa the case is less clear.   It seems extremely unlikely that all three initiatives will survive.  Perhaps Telebras will get gazumped by the private sector the same way Infraco did here in South Africa.  Perhaps one or more of them will join forces.  Tune in next time fellow cable watchers.