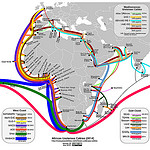 I try not to be shocked any more at new announcements of undersea cable projects that are destined for African shores.  But it’s no good.  I am gobstopped again with the announcement of the BRICs cable. I struggle now to find ways to represent all the impending capacity on a single map without it looking like a dog’s breakfast.   What I thought was a clever innovation, using the width of the cable as an indicator of design capacity, has turned out to be a nightmare as cables like the SAEx cable announced a design capacity of 12.8 terabits/s, 10 times that of the Seacom cable which launched in 2009.  Then things got worse with the WASACE cable announcing a planned design capacity of 40 terabits/s.  Trying to implement that in terms of varying width cables made it look like someone had taken big graffiti marker to the map.

It was clearly time to go non-linear.  Now the width of the cables still scale with capacity but they do so logarithmically.  Something else I would never have guessed I would need to do.  The new version of the map now has both WASACE and BRICS.  There is also the new cable announced by Telebras and Angola Cables but I am holding off adding that one until they have a name for the cable or a website or a map.  Click here to view the latest version.