In order to get a fibre map integrated into the larger AfTerFibre Map, you need will need to submit an annotated KML file.  KML is a file format developed by Google that is used to display geographic data in a browser such as Google Earth, Google Maps, and Google Maps for mobile. KML uses a tag-based structure with nested elements and attributes and is based on the XML standard.  Check out this KML tutorial for more information on it. If you happen to already have a KML version of your map, skip down to the section on Annotating Your Map. 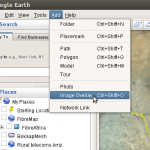 In order to produce a KML version of an image map, you will need to follow these instructions:

Inserting and placing an image overlay in Google Earth 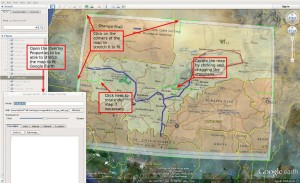 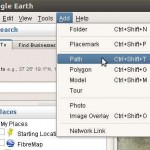 Now you can begin to trace the map.  You will be using the Path utility in Google Earth which can be selected from the Add menu.  This will open up a New Path dialogue box which should stay open while you create your path.  This part of the mapping take a little getting used to.  The first thing to consider is that you want to use as few lines as possible.  Try to pick long contiguous stretches of the fibre that can be made in single line.  This is not absolutely essential but it makes for less data to store.   If the map has different cable phases of deployment.  Try to do those separately.  Thus you might have 3 or 4 paths to cover all the fibre for phase one and a few more for phase two, etc.  So let’s started. 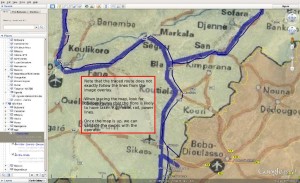 Now we want to be able to say something about the map.  For each path you have created, you will need to enter some meta information about that cable.  The data looks like this: 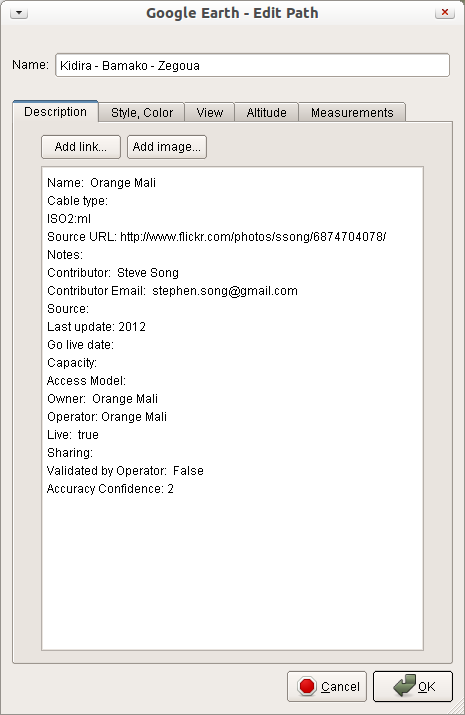 The field names are a first pass at coming up with meaningful ways of describing a cable project.  They will likely evolve as time goes on although we’ll try and make things as backwardly compatible as possible.  Suggests are welcome for improving this fieldset.

Once you’ve completed your map, you can save it in KML format.  To do this:

At this point you have the option of simply emailing the KML file to me directly and I will update the map with it.  Alternatively, if you are familiar with Git and Github, you are welcome to submit the file directly to the AfTerFibre Github at https://github.com/stevesong/afterfibre-kml where it will automatically update the online map at http://afterfibre.net/