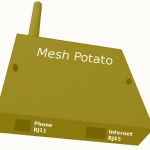 The Foundation has also now provided support to Dabba to work on a simplified interface to A2Billing aimed at Village Telco operation. Early results of this work should be available on the Village Telco website by the end of October.

My first step in trying to make the Village Telco site more useful to people has been to write an FAQ for the Village Telco.  I’ll do another one shortly for the Mesh Potato.  If you have any suggestions for additions or clarifications to the FAQ, please don’t hesitate to post them.