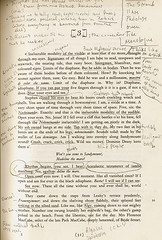 Have you ever purchased a book in a second hand book store and found when you got home that the margins of the pages were crammed with annotations? A bit like the page from James Joyce’s Ulysses at the right. Some may be irritated by the spoiling of a pristine printed page but I  confess to a minor voyeuristic thrill at the prospect of looking at the book through someone else’s eyes. Looking at the text through someone else’s eyes actually makes your relationship to the book more complex.  There are two stories now, the one you created by reading the story and the one that the mysterious annotater created.

When I was in my early twenties, someone gave me a copy of The Annotated Alice as a gift.  The Annotated Alice is a work (of love I suspect) by Martin Gardner, who wrote the Mathematical Games column for the Scientific American for many, many years.  The book is the text of Alice’s Adventures in Wonderland and Through The Looking Glass accompanied by detailed annotations by Gardner revealing the background elements of the story, the Victorian context, as well as the mathematical beauty that Lewis Carrol encoded in his prose and poetry.  This book transformed my appreciation of Lewis Carroll. It also made me aware of how much richer a work can be for having the context in which to appreciate it.  In looking it up for this post, I have since discovered that the publishers have several other annotated volumes.

These thoughts came to mind as I was having a discussion with colleagues at the Shuttleworth Foundation about John-Seely Brown’s perspective on education which emphasises learning through doing but also and perhaps more importantly the importance of learning as a social activity.  In particular, he often gives the example of students of architecture working in an open environment in which a significant part of the learning is the “crit” in which the instructor reviews the work of each journeyman architect as a social exercise.  He says,

students work together in a common space and peripherally participate in each other’s design process; hence they can benefit from their instructors’ comments on and critiques of other students’ projects and not just from comments on their own work.

I imagine this to be somewhat similar to the learning that goes on among medical residents on Grand Rounds.

I thought back to high school and the experience reading well-known set works of literature.  It occurred to me that many of those works are now out of copyright, many of which have been captured by Project Gutenberg.  Wouldn’t it be remarkable if students could access an online environment in which they could annotate the works they were reading and then participate in a “crit” with their instructor in which they discuss the annotations of their peers.  The annotations might start off as a blank slate which evolves into a class collection of annotations. But why stop there?  Why not have a Slashdot/Digg style rating system in which insightful annotations get voted up and mundane ones get buried.  The whole text might become a digital palimpsest of interpretation.

So, just an idea for the moment but one I’m keen to try out.  I can’t help but feel that someone must already be doing something like this.  If anyone has any pointers, I’d love to hear about them.

2011 update: Rufus Pollock and Open Knowledge Foundation have nailed this.  Check out AnnotateIt.