The Yin and Yang of Open

In Eric Beinhocker’s The Origin of Wealth, he describes a fascinating software experiment modelling the prisoner’s dilemma but not between two decision-makers (as in the classical scenario) but rather in a multi-actor evolutionary landscape in which anyone can make a transaction with anyone. The software was used to seed open and closed transaction strategies into an evolutionary landscape. The interesting result is that “open” strategies succeed very well in a very closed ecology and “closed” strategies succeed very well in a very in a very open environment. In this perspective, the whole current movement in favour of “open” might be seen simply as a rebalancing of a very closed economic ecosystem. 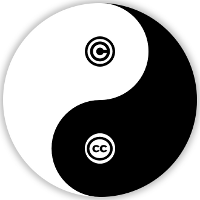 The ICT4D team at IDRC have been thinking a lot about ICT4D and Openness. They have produced an excellent thought piece on Open ICT for Development which has prompted some thoughts of my own. The following is an edited version of my interaction with the ICT4D team.

As an advocate for openness in general, I struggle with the sense that openness is not in and of itself a virtue. If we were talking about Improved Healthcare through ICTs for Development, there would be no question of the development and human good being achieved. Open ICTs for Development is much less obvious. The more I think about it, it seems to me that we don’t want everything to be completely open, we rather want things to be open enough. Put another way, we want some things to be open more than other things and we are prepared to compromise on what those are, recognising that tolerating some closed is a good way of getting more open.

Google is an obvious case, we tolerate Google’s closed search algorithm and closed applications because we get mostly free search, email, and web hosting. We call Microsoft “evil” for having closed software but no one ever gives Intel a hard time about having closed chipsets. We campaign for open mobile platforms but no one ever takes Qualcomm to task for locking up CDMA. If the transaction cost is low enough, how much does open matter?

I suspect that in general we don’t just tolerate a lot of closed, we inherently recognise that the closed is necessary too. Perhaps rather than openness, we should be campaigning for “open enoughness”. Closed and open are an economic yin and yang that need each other.

While I really like “open” as a general umbrella for a number of issues that interest me, the downside I have experienced is that (like the word freedom) everyone has their own concept of what “open” is and before you have gone very far in an “open” discussion, you find yourself in argument because you are using the same word but with sometimes significantly different meanings. Open Access is a case in point. BTW, I am talking about the physical information infrastructure Open Access, not the academic publishing Open Access. Every planned undersea cable around Africa claims the mantle of Open Access yet their economic models range from closed to open.  Open Standards is another case in point.  Anyone looking at Microsoft’s proposed OOXML format can get a sense of how elastic the word open is.

So, I can’t help but wonder whether it wouldn’t short circuit some arguments to focus on the key elements of Open. So what do we mean when we say open?

Equality of Opportunity to Participate (EOP)

A key aspect of “open” is the sense of enabling capacity or agency, empowering economic and social participation. This doesn’t come across so much from the Open Source movement where access and capacity are often taken as given but is distinctly prevalent in other “open” initiatives. ICTs are a powerful tool for increasing EOP.  In particular, making sure the tools of knowledge generation and communication are open is important.  However, as we move into the age of cloud computing and Software as a Service (SaaS) the question of “open enough” raises its head again.

Open is probably most significantly associated with the commons and what can be achieved when we elect to share and manage resources in common. In this case, Open may be an inappropriate name, implying a free-for-all, when what we have learned from the Tragedy of the Commons is that the commons needs management.  ICTs offer particularly interesting dimensions to the commons, such as the ability to leverage our ‘cognitive surplus’, as Clay Shirky calls it.  Not to mention the potential of commons-based approaches to speed innovation. And indeed, the power of the commons to contribute to EOP and Transparency.

So what does the above mean? Well it reminds me of years in the KM4DEV community debating the nature of knowledge versus information versus data (and even, god forbid, wisdom). I find that now, rather than get sidetracked in these interesting but ultimately endless discussions, I am now inclined to talk about “conversations” rather than “knowledge, information, and data” because I find it leads to the kinds of activities that I am interested in.

By the same token, I think I might be tempted to talk about Equality of Opportunity to Participate, Transparency, and the Commons rather than Open itself. Open is a multi-dimensional issue and the more we can be specific about what we mean, the less we might be derailed by ideological interpretation, slogan bandwagoneers, and snake oil salesmen.

Disclaimer:  these thoughts are in the midst of gestation, I reserve the right to change my mind several times yet.