Will the Real Mobile Impact Please Stand Up

I’ve just finished reading Jenny Aker and Isaac Mbiti’s Mobile Phones and Economic Development in Africa. This is an excellent paper and well worth the read. The authors have done a great job in tempering a generally positive view of mobile impact with some hard questions about evidence of the impact of mobile phones on the continent. My one quibble is that they don’t address affordability of mobile services or the competitiveness of African mobile markets.

This paper drives home the point that there is a critical dearth of evidence of regarding mobile impact. There are many case studies of specific communities where there is emerging evidence of apparent impact but nothing generalisable. And there is ResearchICTAFrica (RIA) who provide the only credible African cross-country, demand-side evidence of mobile usage that I know of. Unfortunately RIA have a fraction of the support they deserve to continue and expand their work in this area.

Their conclusion to the paper did not exactly go out on a limb.

Empirical evidence shows that mobile phones have the potential to benefit consumer and producer welfare, and perhaps broader economic development.

Ok, credible academic caution here but even so, this is a disturbingly modest thing to be able to claim about mobiles after 15 years of their existence.  Having said that, it is a refreshing change from the general boosterism from development agencies and mobile operators alike regarding the impact of mobiles

A tempting riposte to this would be to say that the widespread growth of mobile networks in Africa is evidence itself as if the existence of the market itself is a demonstration of utility. This is a seductive point of view but consider that it is equally possible to say the same about the small-arms industry in Africa. The market is a demonstration of demand, not necessarily one of positive social and economic impact.

So here are a few things I’d like to see (by no means exhaustive):

I would like to communication regulators insisting on better, more timely, and more comprehensive usage data from mobile operators. I would like them to negotiate and agree on standards for making sanitised mobile operator statistics available to researchers and the public at large. Even better would be for regional regulatoratory bodies to facilitate common standards across countries. 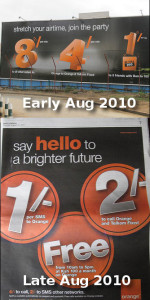 If Kenyan’s are spending 50% of their disposable income on mobile services, what exactly does that mean? How does that break down between urban and rural populations? What is spending on mobile services substituting for? We know that pricing has a direct impact on usage patterns but have only scratched the surface of this. What about Facebook Zero? Is the zero cost interface to Facebook having an impact on usage and how?

Who do people call and why? Is it mostly local? What about data? We know that Google and Facebook are the top Internet destinations for mobile users but we don’t know where they go from there. It would be great if Google and Facebook were to release sanitised data on usage patterns by country.

More research on competition in telecommunication markets in Africa

The recent dramatic price drops in Kenya highlight just how uncompetive markets in Africa still are. If overnight, mobile operators can accommodate a 75% drop in price then you have a pretty good idea of how much wealth is being extracted…. from people who can least afford it.  To date Kenya stands as something of an anomaly, although there is hope that Bharti, having brought this aggressive competition to Kenya, will extend it to the other countries they now operate in.

I realise the above may make me sound like a bit of a nay-sayer.   On the contrary, I really do believe mobiles are having an important positive social and economic impact in Africa. I would just like to be better armed to defend my point of view and better able to target areas for improvement.