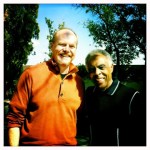 On Wednesday this week I was fortunate enough to spend a couple of hours chatting with Gilberto Gil.  I am still pinching myself.

When I was 17, I was an exchange student for a year in Brazil.  It was there I was introduced to Musica Popular Brasileira (MPB) which translates to Popular Brazilian Music but the translation doesn’t do it justice.  Musica Popular Brasileira is a unique mix of latin american, african, folk and pop sensibilities that mixes catchy melodies with complex rhythms.  Gilberto Gil was not only a pioneer of MPB, he was also one of the first Brazilian artists to become  internationally famous as well.

My love of Brazilian music is bound up in the massive cultural impression that Brazil made on me as a teenager.  Suffice to say I’ve been a lover of MPB ever since.  Gilberto Gil, Chico Buarque, Maria Bethania, Caetano Veloso and now a host of others define me in the way that we allow ourselves to be defined by music, connecting with an attitude, an aesthetic, an emotion.

Of course Gilberto Gil isn’t just an amazing musician.  He has also had a successful career in Brazilian politics culminating in his post as Minister of Culture in President Lula’s government.  He wasn’t your average Minister of Culture either.  As a champion of Open Source culture he helped lead Brasil towards more progressive intellectual property approaches including supporting the Creative Commons and promoting Open Source software development.

So, brilliant musician and champion of one of the things I hold close to my heart, I was understandably a bit apprehensive about meeting him.  At this you may be wondering, what ARE you doing meeting with Gilberto Gil?  A very happy stroke of luck.  Together with Swiss production company, DreamPixies, Gilberto Gil is making a documentary called Connecting South that explores his unique perspective on the world, combining music, indigenous knowledge and philosophy with the open culture movement, technology and its implications.  First prize would have been to get Mark Shuttleworth to talk about the origin of Ubuntu but thanks to challenges with his schedule, I was lucky enough to get the opportunity to participate.

Often, meeting one’s heroes can be a disappointing experience.  They are never what we imagine to be and there is a natural tendency to build them up beyond reasonable expectations.  So, I was prepared to be disappointed.  I was also nervous that I was going to make a complete ass of myself.  I shouldn’t have worried. 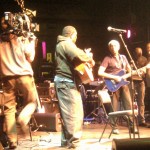 He brought something to our conversation that I wasn’t expecting.  Humility.  I still can’t get over the fact that the person I was talking to was an international music superstar, visionary politician, among many other things.  We got two hours to talk about things we both love: open culture, Brazilian music, Ubuntu philosophy, and the enormous potential for transformation that lies before us as we face challenges bigger challenges than the world has ever faced before.

Perhaps that is just a talent, making people feel at home.  Whatever the case, Gilberto Gil’s obvious humanity and humility in the face of his remarkable achievements are a profound inspiration.  An inspiration to do more, to do better, to be better.

And as a bonus I don’t think I said anything egregiously stupid.  Being able to sit on the rehearsal later that day with Vusi Mahlasela only reinforced that sense of inspiration.  Thank you.