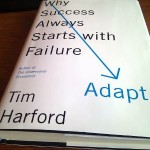 A book that has been on my mind a lot recently is Tim Harford’s Adapt: Why Success Always Starts With Failure. Tim Harford is a great story-teller and he makes his case Gladwell-style by mixing research with individual narratives that bring research results to life. He convincingly articulates the point that life is a lot more random than we imagine and that we are much less capable of predicting the future than we imagine.  This is not exactly a new concept.  Nicholas Nassim Taleb made the case that markets are much less predictable than we think in 2001 with Fooled by Randomness.  He went further than that in 2007 with The Black Swan: The Impact of the Highly Improbable in which he argued that not only are complex systems unpredictable but they are prone to catastrophic failure.

It is this message that Tim Harford drives home in his book.  He states that economies, governments, corporations, and markets are not the essentially predictable entities, naturally tending towards equilibrium, that neo-classical economics tells us they are.   Instead he builds on the work of people like evolutionary economist Eric Beinhocker and complexity theorist Stuart Kauffman (among others) arguing that an evolutionary model offers a better explanation for market behaviour, the life and death of corporations, and human systems in general.  If systems are effectively unpredictable, Harford draws the inevitable conclusion that making big bets on the future may not be such a good idea.  He draws on what we’ve learnt about evolution and suggests we follow some basic rules of success for evolutionary environments.  He boils this down to three rules of thumb:

This is a pretty compelling argument, especially in the light of the obvious lack of predictability and catastrophic failures that we have seen in the last few years.  He should have stopped there.  But unfortunately he goes on to link this issue to leadership.  He cites the work of economist Paul Ormerod who has compared the extinction patterns of animal species over a half billion years with the life and death of corporations and found some striking similarities.  This is good as far as it goes and reinforces the notion of markets as evolutionary systems.  He goes further though drawing on some additional work of Ormerod in which he attempts to create a mathematical model which represented corporations as modestly successful planners.  Ormerod found that this model couldn’t be made to match the extinction pattern of corporations nearly as well as the straight-out evolutionary model.  Tim Harford takes this result and says:

We should not leap to conclusions based on an abstract mathematical model, but Ormerod’s discovery strongly implies that effective planning is rare in the modern economy.  I wouldn’t go so far as to suggest that Apple should replace Steve Jobs with a dart-throwing chimpanzee — even though it would certainly liven up Apple product launches.

Harford fails to take his own advice here because he does leap to the conclusion that leadership is overrated.  Don’t get me wrong I am not in favour of the cult of the CEO nor do I think that the vast majority of them deserve the salaries that are orders of magnitude larger than their co-workers.  However, I do think he confuses planning with leadership, implying that the fact that leaders cannot predict accurately predict the future reduces their utility.

Steve Jobs is a great illustration of this and, as luck would have it, his recent decision to step down will be a good opportunity to test Harford’s theory.  The popular perception of Steve Jobs is of a visionary CEO leading his loyal acolytes into the future.  That represents a basic misunderstanding leadership.  This Harvard Business Review entitled Why Apple Doesn’t Need Steve Jobs articulates it well.  What Steve Jobs gave Apple was not so much great future foresight but great culture.  Steve Jobs inspired Apple staff with a vision, a sense of mission, an esprit de corps.  So powerful was this cultural leadership that people buy Apple products in part to access that ineffable quality that seems to permeate Apple products.  Having said that, it is not entirely clear that Apple doesn’t need Steve Jobs as research by Clayten Christensen referenced in this Economist article indicates that:

during Mr Jobs’s first tenure at Apple, the company’s innovation premium was 37%. In 1985-98, when Mr Jobs was elsewhere, the premium fell to minus 30%. Now that Mr Jobs is back, the premium has risen to 52%.

To be fair, the innovation premium and how it is calculated is yet another subject of debate.  But what is true is that most of us have, at one time or another, experienced leadership and know what kind of impact it can have on us personally.  A great leader (not always the top dog) makes us want to be better than we are and makes us feel that we are part of something larger.  Great leaders inspire us to transcend our own limitations.  They inspire a sense of purpose.  This quality, while very tangible is also hard to measure which is perhaps why it doesn’t feature in Adapt which, in its quest to build conclusions on hard evidence, misses the bigger picture.

Tim Harford also wonders at how we rate politicians.  He asks, if trial and error is indeed a more sensible approach to decision-making around complex systems, why do we applaud politicians like Margaret Thatcher who famously said “You turn if you want to. The lady is not for turning” or Tony Blair who claimed not to have a reverse gear.  Worse than that, politicians who change their mind are branded as flip-floppers.  Why don’t we embrace leaders who are publicly prepared to change their minds.  Again, he betrays a misunderstanding of leadership.  A big part of leadership is to inspire the people you are meant to be leading, even occasionally at the expense of the truth.

My favourite example of this is from the movie Band of Brothers TV mini-series that profiles the lives of men in a company from the U.S. 101st Airborne Division in World War II.   The scene I am referring to is from the 7th episode, The Breaking Point, which finds the company in winter with little food and under heavy bombardment.  Their nominal leader, a Lieutenant, is unfit for the job and largely absents himself from the front lines.  The company sergeant is left to “lead” the company and what got me thinking was how he responded to the men who began to voice their doubts and suspicions about their lieutenant.  He lied.  He told them what they needed to hear, which was that everything was alright and that they were going to survive.  People talk about the “air” of success and the “smell” of defeat.  Our attitudes shape the future as surely as our resources and abilities do.  Politicians talk that way because we want them to.  We want to believe that we’re heading in the right direction and that everything is going to be alright.  The ironic thing is that believing plays an important role in it turning out to be true.

This doesn’t in any way invalidate the importance of an evolutionary trial & error approach.  It means we need leaders who will give us the confidence to fail and move on with the certainly of succeeding eventually.