Malawi is not a country that often makes the international news, particularly not in the realm of connectivity. Economically poor and landlocked, it faces significant challenges in achieving affordable access for all. While both the incumbent telco (MTL) and the electricity parastatal (Escom) have national fibre backbone networks, achieving affordable Internet access in rural areas remains a huge obstacle.

That could all be changing thanks to the vision of Chomora Mikeka, a lecturer at the Physics Department at Chancellor College of the University of Malawi.  Chomora has forged a partnership between the Physics Department and Malawi Communications Regulatory Authority (MACRA) to establish a White Spaces pilot project in Zomba.   The pilot also enjoys the support and collaboration of the Marconi Wireless Lab (T/ICT4D) at the International Center for Theoretical Physics (ICTP) in Trieste, Italy.  ICTP have a long history of supporting wireless access research in Africa.

On behalf of the Network Startup Resource Center (NSRC), I was able to join the pilot deployment team as they set up the first connections for the pilot.  I met up with Chomora ten days ago along with the ICTP team of Marco Zennaro, Ermanno Pietrosemoli, Carlo Fonda, and Andrés Arcia-Moret.  ICTP have extensive experience in the deployment of wireless networks around the world and are an ideal technical partner for Chancellor College and MACRA.  The pilot is designed to connect a number of different institutions including a school, a hospital, an airport and a research facility. 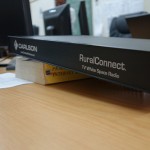 The first step in setting up the network was establishing that the base station equipment was functioning correctly.  Like the white spaces trial in South Africa, the pilot is using equipment from Carlson Wireless.  At the time of procurement, Carlson was the only company ready to supply white spaces equipment.  This is changing slowly.  The base station depends on an Internet connection in order to validate and download any updates to the system from Carlson.  Having verified that the base station could communicate with Carlson’s server from behind the university’s firewall, it was time to move to the next step, setting up the main antenna. 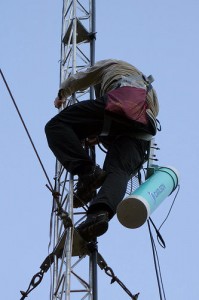 The pilot is using a unique omni-directional antenna produced by Carlson which is designed to offer performance across a wide range of UHF frequencies.  It looks like a big mailer tube and is pretty hefty.  Arrangements were made with the nearby Chancellor College community radio station to use their FM tower to mount the antenna.  The FM tower is a tall guyed-mast affair that looked a little dubious when it came to supporting the weight of an installer and the antenna, however, the experienced ICTP team were able to get the white spaces antenna in place along with a 5GHz backhaul link in a matter of hours.  The antenna was mounted at a height of 23m which according to the initial spectrum measurements carried out by ICTP should provide a range of up to 20km.  Having a ready-made high site in the form of the FM radio tower to mount the antenna on saved both time and expense in the deployment. 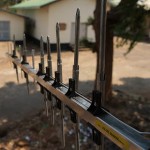 This is the first deployment, to my knowledge, of a point-to-multipoint omni-directional white spaces antenna in Africa. One of the interesting questions to explore will be how many white spaces clients can be supported connecting to a single omni antenna.  At the other end of the link, the white spaces client devices use a different kind of antenna known as Yagi-Uda or more commonly Yagi antenna.  A Yagi antenna looks a bit like the business end of a swordfish and is designed to focus a radio signal for maximum range.  Typical Yagi antennas are very limited in the bandwidth range they can operate over.   The ones deployed in the pilot are a significant modification of the original Yagi design,  offering a gain between 9 and 11 dBi over the frequency range from 400 MHz to 800 MHz. 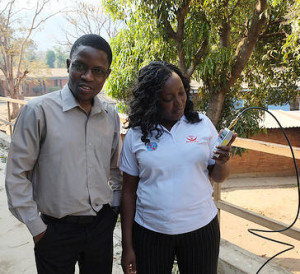 One of the best things about the pilot deployment was that it wasn’t just the technical team of Chomora and ICTP involved in the deployment.  Chomora had a number of his students from the Physics Dept involved and they were able to learn from the experts at each stage of deployment.  Equally interesting was the involvement of MACRA who sent Spectrum Planning Officers, Stan Chimgoga and Tryness Kantedza to participate in the deployment as well.  It bodes well for this pilot that there is such involvement and commitment to the pilot. Indeed, Lloyd Momba, Director of Telecommunications at MACRA as well as Jonathan Pinifolo, Deputy Director for Spectrum Management have been pivotal in the bringing the project to fruition.

The pilot connected a number of different types of institutions.  I wasn’t able to stay for the entire deployment but was able to get the full story afterwards from Marco and Ermanno.   First, a girls school.  St. Mary’s Girls Secondary School serves about 480 students and is only 2.4km away from the FM tower.  Connecting schools is a strategic issue for MACRA as they hope through white spaces technology, they may be able to aggregate demand and provide a less expensive connectivity option for schools than the current option of ADSL.  They also hope that white spaces will reach schools beyond the range of copper wire networks.

Next came Pirimiti Community Hospital.  This is one of the more interesting and challenging links for the pilot as it is about 20km from the FM tower.  Unfortunately, an initial site for the yagi antenna had to be changed and the deployment there was delayed to allow for the construction of an independent 12m mast for the antenna.  Other sites included the Seismology Department of the Government of Malawi which is a research node and partner in the continental AfricaArray project and  and finally a link to the Malawi Defense Force, Airwing (Air Force Maintenance Department).

The pilot deployment team has installed monitoring appliances in the form of Alix boards at each site to run performance measurements, the results of which will be openly shared.

Almost more challenging than the white spaces links was the Internet uplink for the project.  Initially there was to have been a fibre connection to the FM radio station itself.  Unfortunately this link had not been built in time for the pilot deployment.  As a backup plan the Chancellor College offered to share its connectivity with the project.  This was implemented via a 5GHz point-to-point link between the college and the FM radio tower.  Unfortunately the entire university campus in Zomba is limited to 5.5Mbps of service 4Mbps from MTL (fiber) and 1.5Mbps from Astrium (VSAT).  As the white spaces pilot came on line, the additional bandwidth use caused the university IT managers some concern and ultimately they were obliged to withdraw bandwidth support for the pilot.

It is a tribute to the Malawian regulator that, in the face of this obstacle, they have committed to providing a dedicated 2Mbps link at their own expense for the pilot for a full year.  It is frankly inspiring to see the support and leadership that MACRA have brought to this pilot.  Their plans are to run the pilot until December of this year and then make an assessment.

The pilot proponents take as their starting position the fact that television spectrum is significantly unused in Malawi, especially in rural areas.  This may mean that it is feasible to develop white spaces technology initially in Malawi without the overhead of a geo-location database.  On the other hand, they recognise the benefits that a spectrum database can offer in terms of creating a knowledge-base of spectrum occupancy, of being able to vary power output levels for differing contexts, and in potentially extending dynamic spectrum use beyond the VHF/UHF bands.  Their perspective is that a geo-location database can be a natural evolution in developing white spaces regulation but not a requirement to get initial regulation in place.

All of this above makes Malawi an absolutely fascinating place to watch white spaces technology and regulation evolve.  It is possible we may see an African model for white spaces regulation emerge from Malawi that may be better suited to the sparse spectrum occupancy of the TV bands in the region.  The fact that this initiative is owned equally by the University of Malawi and MACRA bodes well for the development of regulation that is appropriate to the problem at hand, rural access.  Malawi may well be the first African country to establish white spaces regulation.

Below is a brief video interview about the pilot with Chomora Mikeka.

A range of photos from the deployment can be found on my Flickr page as well as that of Marco Zennaro.

Note:  Thanks to Chomora Mikeka, Marco Zennaro, and Ermanno Pietrosemoli for invaluable additions and corrections to the original article.