Mobile — You Keep Using That Word 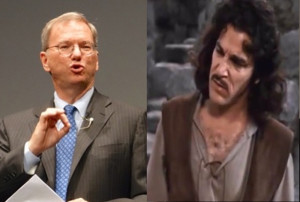 In his predictions for 2014, Google chairman Eric Schmidt boldly states “mobile has won“.  For a man who has made some fairly ambitious predictions in the past,  pundits regarded this prediction as fairly tame, perhaps even self-evident.

Yet lurking beneath this bland platitude is an emerging paradigm change.  Let’s look at what we know about “mobile” technology.  We know that feature phones, smartphones, and tablets are all lumped together under the broad rubric of mobile.  Look closer though.  According to industry analyst Craig Moffett, about 80% of tablets sold are WiFi-only devices.  Of the remaining 20% about half of those are never activated and about half of the people who activate their mobile subscriptions end up cancelling them.  That would make 1 in 20 tablets a “mobile” device.

When it comes to smartphones, we know that the bulk of smartphone data travels over WiFi networks.  It varies from country to country but across a range of countries that figure is about 75%.  That is an astounding percentage for a “mobile” device.  New hybrid service providers like Republic Wireless in the United States are beginning to push back against this conventional wisdom.  In a recent article, Republic CEO, David Morken held up their flagship Motorola Moto X smartphone, and declared, “This is a Wi-Fi device.”  That is a pretty big statement but it is reflective of just how successful WiFi has become.  If you read this blog, this will be old news to you.  It’s a drum I bang often.  “Mobile” devices and mobile networks are not the same thing although the mobile network operators would love you to think so.

So when I saw this pronouncement from Eric Schmidt, I was reminded of Inigo Montoya in the The Princess Bride who finally could not resisting questioning criminal mastermind Vezzini’s use of the word “inconceivable”.  “You keep using that word, I do not think it means what you think it means.”

Does all of that add up to a paradigm shift?  Perhaps not on its own.  WiFi has become a ubiquitous last-inch technology capable of providing access anywhere people congregate, homes, workplaces, cafes, hotels, airports, you name it.  But that is only part of the picture.  Connectivity has to get to the WiFi hotspot.  And that is where we can see the beginning of a real paradigm shift.  When mobile networks first grew, they had to do it all.  They had to build the base-stations, build the backhaul to the base-stations, and provide the handsets.  The growth of national and metro fibre networks is changing all that.

As fibre networks become more pervasive and WiFi technologies (whites spaces technologies too) continue to improve in performance and to become more widespread, they have the potential to offer a complete “mobile” experience on a smartphone or tablet without resorting to mobile networks except when users are in transit between destinations. It increasingly possible to disaggregate the chain of access to the Internet and introduce more competition at every level of access.

The extent to which fibre infrastructure and unlicensed wireless will be a game changer in terms of access in African countries will depend on the leadership in policy and regulatory environments.  The combination of Open Access backbones, metropolitan fibre networks, and unlicensed wireless has the potential to level the playing field in terms of affordable access forcing mobile operators to adapt faster to remain competitive.  Now, wouldn’t that be a good thing?