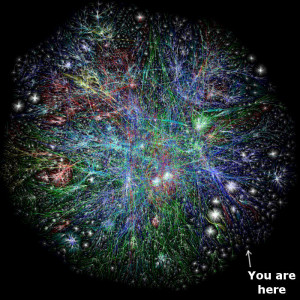 The Net Neutrality debate has been back in the news over the last few weeks, thanks to an announcement from the United States communications regulator (FCC) that they were revisiting Net Neutrality in the light of a court decision in January which struck down the FCC’s previous Open Internet rules.

This has stirred up a lot of debate and several news outlets have written opinion pieces on net neutrality and whether it is essential or an obstacle to the healthy evolution of the Internet.  Unfortunately, like many other debates about communication technology, the experts disagree and often the debates come down to variations on Jack Nicholson in a A Few Good Men…. “you can’t handle the truth!”, a lot of accusations about other people not really understanding how the Internet “really works”.  And indeed, it is non-trivial to understand how the Internet works these days.  Backbone providers, peering and transit agreements, Content Distribution Networks (CDNs) are all evolving at the same time to try to keep up with demand.  But the debate has really focused on the United States and the whole Net Neutrality debate is framed in the context of the US Internet industry.  So, what does Net Neutrality mean for African countries.  Should African regulators be taking active steps to address Net Neutrality?  Like most things, scratch beneath the surface and a wealth of complexity emerges.

So, cards on the table first.  As a general principle, I believe Net Neutrality is essential for the healthy development of the Internet.  The argument for enforcing network neutrality is made much better than I can make it here, here, and in this great explainer animation here.  But before we can ask the Net Neutrality question for Africa, we need to take a step back and unpack the motivation behind Net Neutrality.  Coined by Tim Wu, a Canadian academic living in the US, Net Neutrality reflects the idea that “Internet service providers (ISPs) and governments should treat all data on the Internet equally, not discriminating or charging differentially by user, content, site, platform, application, type of attached equipment, and modes of communication.”  The central motivation in Net Neutrality is that we are all created equal on the Internet and that it works the same for everyone.

How does that play out in real life?  Around the world, ISPs routinely throttle peer-to-peer (bittorrent) traffic, arguing that it swamps their networks.  This is encouraged by movie company lobbyists who argue that bittorrent is largely used to illegally pirate copyrighted content.  Whether that is true or not is a subject for another debate but what is true is that any legitimate uses of bittorrent are also blocked in the process.  Similarly ISPs have been found guilty of blocking websites that did not suit their political or corporate agenda.  While censorship is part of the Net Neutrality debate, it is also part of a broader debate on human rights and the Internet.  Censorship, in one sense, is less pernicious than throttling or prioritising traffic because blocking an Internet site or service is comparatively easy to measure.

The really controversial aspect of Net Neutrality is the kind of behind-the-scenes throttling or prioritisation of traffic, the impact of which is difficult to measure.  People talk about the danger of having an Internet “fast lane” likening it to a real highway but the reality is that it would be an invisible fast lane.  So, if you’re a South African, imagine the blue light brigade but instead of screaming past you with sirens going, imagine government officials just always showing up before you at meetings, sitting smugly in their chairs sipping coffee as you arrive breathless after sitting forever in traffic.  You could have sworn you left at the same time.  Many ISPs simply deny throttling Internet traffic and regulators have to spend an inordinate amount of time and effort gathering data to confirm their suspicions.

Yet all these arguments are based on the core assumption that the majority of people already have access to the Internet.  The Net Neutrality debate only addresses the quality of access which is perhaps ok in a place like the United States where most people do have some kind of access but in sub-Saharan Africa, the majority do not have Internet access.  It is a bit like that old saying “I used to complain I had no shoes until I met a man that had no feet”.  A few years ago, I referred to this problem as “Internet diabetes” playing on the fact that diabetes was almost unknown among the poor but I see now that diabetes is on the rise in Africa and similarly, as access improves on the continent, Net Neutrality will become a more pressing issue to deal with.

That was the case in South Africa and many other African countries back in 2008 when the only international fibre optic access was through SAT3 which was controlled by a cartel of incumbent telcos.  In 2009, with the arrival of the Seacom undersea cable and the liberalisation of the ISP market, real competition began for Internet service provision.  At first it was still expensive and there were caps on Internet access and throttling of all peer-to-peer traffic.  Did we care?  Not very much.  Mostly we were thrilled to have something that was beginning to resemble high-speed Internet.  As more cables arrived on South African shores, caps grew larger, prices dropped, and ISPs began to offer what they euphemistically called “shaped” or “unshaped” Internet bundles which were throttled or unthrottled services.  Today, very few, if any, South African ISPs offer “shaped” services and some even offer guides to using bittorrent.  What brought South Africa to this happy state?  Competition.  Competition in international traffic as more undersea cables arrived and competition in the local market as ISPs struggled to differentiate themselves from each other.

Another thing that made a big difference to Internet access in South Africa was the decision by Google to place a YouTube cache with the TENET, the South African National Research and Education Network (NREN).  Prior to this streaming YouTube videos was painfully slow in South Africa.  If a video was more than five minutes long, I would often start it going before going out to a meeting or to lunch and play it when I got back.  Having a local YouTube cache was a dramatic improvement in access and saved South African ISPs a bundle in international traffic charges.  Incidentally, it also turned out to be a significant catalyst for local peering at Internet Exchange Point because that was the only way to get access to the cache.  Isn’t that a violation of Net Neutrality though?  The fact that Google was effectively sponsoring local access to YouTube?  I recent posed this question to Rudoph van der Berg, who researches these issues for the OECD.  I asked whether local caching of YouTube wasn’t unfair prioritisation of their video traffic, especially for a local startup like Zoopy, a South African YouTube-like service that ultimately failed.  He pointed out that the cache was available on equal terms to all ISPs and any of Google’s competitors were at liberty to introduce their own caches.  In addition, the caching is done in a competitively transparent way that doesn’t favour a single ISP.  This is a subtle point however because it does pretty clearly improve the consumer’s experience of Google and only Google.  On the other hand CDNs like this are now central to the sustainable running of the Internet now.  They save capacity on international links and offer immediacy of content where being far from the epicentre of the Internet results in dreaded Internet “lag”.

There is another kind of Net Neutrality violation in African countries that is generally positively received.  It falls under the umbrella of zero-rated services.  Facebook was the first big Internet entity to do this back in 2010 and they continue to expand this service.  At the time I hailed them for this move because they seemed to get what Google didn’t, which was that affordability was key to access.  In 2012, Google followed suited with the Free Zone. More recently, Wikipedia has gotten in on the act with Wikipedia Zero. Pundits have argued that standing up for Net Neutrality would endanger these services that benefit the poor.  Few people would argue against an initiative to offer free access to Wikipedia for those who can least afford it.  However, Facebook Zero and Google Free Zone are pretty clearly biasing the market for digital services.  This would make it much harder for any startup wanting to go head to head with FB and Google on any of their services.   But for the consumer, the answer is pretty simple.  It’s like scissor cuts paper.  Bad access trumps no access every single day of the week. Will this lead to African nations filled with mindless Google / Facebook zombies mindlessly doing what their digital overlords tell them?  No or at least no more so than anyone with full Internet access.  We’ve seen this scenario already in the 1990s in the United States.  Companies like AOL, Compuserve, and MSN attempted to created walled gardens that inhibited users from straying on the Internet.  Competition solved this problem when customers chose unfettered Internet access.

In conclusion, when it comes to regulation of the communication industry, regulators have two big choices:  intervene remedially or intervene by introducing more competition.  History has shown that the latter is almost always the more successful move.  However, easier said than done.  In the US, there is a comfortable duopoly between the cable and telephone companies.  In Africa, where mobile wireless technology represent the primary means of access, it is the big mobile network operators that dominate and do their best to inhibit new market entrants.  Introducing competition at each level of access and breaking down vertical markets will do as much or more to fix Net Neutrality than any punitive measures. The secret to Net Neutrality is a competitive wholesale and retail market for Internet services and that is true everywhere.