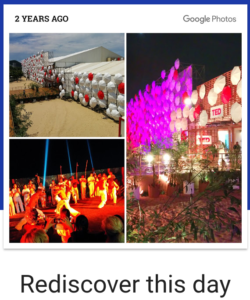 Recently a bot informed me that it was the 2 year anniversary of my speaking at TED Global 2014.  And that reminded me of what I have been putting off writing for a while, putting off well, because I find it hard.

Shortly after TED Global, I wrote about my experience of the event. What I didn’t mention was the talk that Chris Anderson gives speakers prior to going on stage about the post-talk process for putting TED talks up online.  He explained that not all talks go up immediately, that it might take up to a year for that process to come to fruition.  He went on to say that, for some talks, they might decide that the speaker had better talks to give.  I can’t remember exactly how he phrased it; it was delicately put. In a nutshell, not all talks go online.

Obviously this is a big deal. It was a primary motivating factor in my decision to agree to do the talk. By this point, you have guessed where this is going, my talk wasn’t selected for publication.  This was a pretty big disappointment.  I really hoped that having the talk online would be a powerful tool in spreading a different narrative about affordable access.  What was emotionally worse though was having to respond to friends and colleagues when they asked where they could watch the talk online.

For the first year, I was able to say that it might be in the queue.  Due to a communications mix-up they failed to inform me of their decision and, pusillanimously, I preferred to assume that is was still in the queue rather than ask the TED folk the question outright.  As the months wore on I began to suspect the answer.  After 11 months, I steeled myself to ask and Bruno explained in the nicest way possible that while the talk had worked in the theatre, it didn’t “land” as a video.  Once again they had a delicate turn of phrase in letting you down.  I guess they’ve had practice.  It was still a very hard email to read.  Hard to square the reality that was with the reality I wanted.

But I like to imagine that I am not the person I was, someone who would have internalized this failure and hugged it quietly to myself while accepting as a some kind of judgement.  Writing this is part of proving that to myself and I can point to two things that helped me.  One is Carol Dweck’s Mindset, a book I wish I had read when I was an adolescent.  Mindset is one of the most important books I have read as an adult.  It helped me to recognise that failure is not a personal judgement on my worth as a human being but an opportunity to evolve.  It started a journey that I am still in the midst of.  Sounds obvious doesn’t it?  Easy to say, hard to live.  I am still internalizing the lessons of the book and losing my hang-up about failure is a work in progress.

The other inspiration for writing this is Princeton professor, Johannes Haushofer, who earlier this year published his CV of failures in which he catalogues in Curriculum Vitae style, the jobs, fellowships, programs that he has applied for but did not get.

One of the most strangely inspirational things I have ever read is this CV of failures. @jhaushofer is my new hero https://t.co/evYgGbd8QV

Haushofer himself acknowledges he was inspired an article in Nature by Melanie Stefan.  I want to say thanks in public to both of them for giving me courage.  Their failure CVs emphasised for me the importance of owning failures (without dwelling on them) as a means of internalising learning and moving on.  What I also learned was the value of doing it publicly.  Social media has become a place where we are encouraged to demonstrate how awesome we are; the cool places we’ve been, the fabulous things we’ve eaten, the famous people we’ve met.  It fosters a sense that everyone else is doing better than you are, having a better time, being more successful, etc.  We don’t often reveal when we fall and it hurts.  Haushofer’s CV was an inspiration in that regard although interestingly although in his CV the emotion is all implied.

So what did I learn from my failure to TED?  A few things.

It was still a cool experience and am grateful for the opportunity.  Would I do it again?  Of course.   I enjoy public speaking and sometimes I do it moderately well. Wish it hadn’t taken two years to write this but getting it out there at all is a step forward.