Dynamic Spectrum in Africa in 2018

Advocating for change in spectrum regulation is not a game for sprinters.  As someone who has championed dynamic spectrum regulation for a longer than I would ever have imagined, I am still getting used to the idea that what looks like the finish line, may just be the start of a another lap. For anyone interested in TV White Spaces spectrum or dynamic spectrum regulation in general, the place to go is the Dynamic Spectrum Alliance (DSA) Global Summit which is now in its fifth year and which took place last week in London. I attended the first two Summits in 2014 and 2015 with a sense of being on the crest of a wave that was about to break in terms of both dynamic spectrum regulation and manufacturing. By 2016, I was beginning to wonder what it would take to get that wave to break. Lots of countries in Africa had started TVWS pilots and trials and several regulators were in the early stages of looking at regulation but that’s where things seemed to get stuck.  Fast forward to 2018, I attended this year’s Global Summit to see what the state of play is.

Equally interesting is how this momentum is growing at the same time as the mobile industry is engaged in a marketing campaign for 5G technology and the need for regulators to make spectrum available for it. The tension between a mobile-dominated 5G world and a more flexible, lower-barrier-to-market-entry approach with dynamic spectrum regulation was in evidence at the event. How spectrum is made available is becoming an increasingly contentious issue as demand for spectrum increases and regulators struggle to find the most effective means of ensuring maximum spectrum utilisation.

Keynote speaker, Lord Willets, of the UK House of Lords, highlighted the issue by reporting statistics of spectrum occupancy in rural areas in the UK. He argued that the assignment of exclusive national spectrum licenses has led to a tremendous ‘geographic’ waste of spectrum. Spectrum lies fallow wherever operators have licenses but have not built networks. He presented OFCOM data which suggested, for instance, that 5 years after auction, 98% of 4G spectrum in 2.6GHz is unoccupied. This would be as a result of focus on more lucrative, urban deployments by operators. He suggested that the serendipitous re-use of spectrum on a dynamic, non-interference basis could help re-dress the growing digital divide between urban and rural areas. 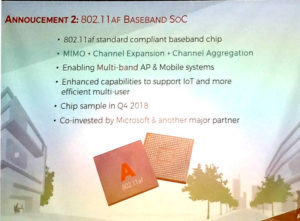 Adaptrum appeared to lead the manufacturers with announcements of their version 2.5 of their ACRS platform which now offers channel aggregation in TVWS. Channel aggregation makes it possible to transcend the roughly 10Mbps limit of a single television channel offering double or even quadruple that capacity.

Even more significant from Adaptrum was their announcement of the development of an ASIC TVWS 802.11af chipset. ASIC manufacturing is a critical step in achieving manufacturing scale and lowering costs. They promise to have a chip sample by Q4 2018. As excited as I am about this prospect, I remember the same announcement by back in 2105 from Mediatek and Aviacomm. Neither Mediatek nor Aviacomm were in evidence at the Summit last week.

Carlson Wireless were also in attendance but I was disappointed not to see anyone from  6harmonics.  Adaptrum, Carlson, and 6harmonics have been the pioneers startups in the TVWS industry from the earliest days of its commercialisation.

While a number of companies in the US that originally offered TVWS geo-location database services seem to given up on TVWS, a new service provider in the United Kingdom has come to prominence. Nominet is the official registry for the .UK domain and derive their revenues from domain registration fees. They describe themselves as a “profit with a purpose” company. As such they have re-invested their profits in a a few strategic areas, including the development of a TV White Space geo-location database and service. Finland’s FairSpectrum were also there. They offer a competing service to Nominet for TVWS geo-location but most of their business seems focused on LTE Licensed Shared Access (LSA) services in countries where that is being offered. Nominet’s quasi for-profit status makes them an interesting player in this space, especially in the context of emerging markets.

In emerging markets, the implementation of a geo-location database for TVWS services remains a challenge to regulators with limited technical and financial resources. One possible answer to this challenge would be to implement a geo-location database regionally instead of nationally, working through regional regulatory associations like the Communication Regulators Association of Southern Africa (CRASA). Hosting a database at CRASA would allow the costs to be defrayed across the thirteen member states and could have the added benefit of addressing any cross-border interference issues. For comparatively long and thin countries like Malawi and Mozambique, this may be essential.

While I am encouraged by the entry of a “profit with a purpose” company like Nominet into this space, I think that a geo-location database for dynamic spectrum falls so squarely in the realm of public good that there ought to be a common, standards-based Open Source software platform for it that would allow companies to compete on service provision but not the underlying technology.  An Open Source platform would also be a great way to build trust with country regulators.

The regulator that attracted the most attention at the event was Mozambique. The team at INCM have made remarkable progress since their first trials back in August of 2015. They have since partnered with Nominet and Adaptrum to deploy several TVWS base stations managed by Nominet’s geo-location database. They intend to publish a “norm” by June of this year which will allow the use of TVWS devices by any licensed operator. I confess I had never heard of a “norm” but I gather it is a mechanism that allows the regulator to enact regulations without having to go through the longer ministerial process of public consultations and formal gazetting of regulation. The ‘norm’ lasts for a two-year period, renewable I believe. Whether this provides the market with sufficient investor confidence in the stability of regulation for TVWS remains to be seen. David and his team were recipients of an award at the Summit celebrating their progress.

Both the regulator (ICASA) and the Council for Scientific and Industrial Research (CSIR) were represented at the Summit and were recognised with an award for their recent gazetting of TV White Space regulations at the end of March 2018. While this is a huge step forward for a process that began with a pilot back in 2013, it is not quite the end of the road. The regulator has yet to appoint a geo-location database service provider. In an odd twist, the CSIR has developed its own geo-location database that has been tested and approved by OFCOM but there does not appear to be any intention to implement CSIR’s database as a service provider in South Africa. This may simply be a limitation of CSIR as a research institution.

Malawi was an early leader in both TVWS pilots and the development of draft regulation but the regulator (MACRA) has never gone as far as formal gazetting of TVWS regulations. While stopping short for general regulation, they did grant permission to a Malawian company, C3, in 2016  to roll out TVWS technology throughout the country. Unfortunately C3 had internal challenges that prevented them from moving forward. Former C3 CTO, Richard Chisala, was at the Summit representing his new company UltiNets which hopes to deliver on the original promise of C3.

Nigeria was represented both by the National Broadcasting Commission (NBC) as well as ICT service provider Sidmach. There have a number of TVWS pilots in Nigeria but no sign yet of regulation. I wish I had talked more with the representatives from the Botswana regulation (BOCRA) at the Summit. They were at the Summit in force but I didn’t learn of any progress in TVWS regulation there since their Microsoft-sponsored pilot.  Similarly representatives from Namibian regulator (CRAN) were there but no news on progress with a similarly sponsored TVWS pilot to connect schools there or related regulation.  Notable by their absence at the Summit was anyone from Ghana. In 2016, the Ghanaian regulator held consultations on TVWS regulation but there hasn’t been any news since.

Spectrum regulation sits on the cusp of change. Five years ago when dynamic spectrum regulation advocacy in Africa was just getting started, there comparatively little pressure on regulators to make spectrum available. Now in 2018, regulators are pressed by both the private sector and by government to make spectrum available for 4G as well as 5G services. High costs for exclusive spectrum licenses, while a boon for the exchequer, may lead to several negative consequences for affordable access for all.  High exclusive license fees:

Dynamic spectrum regulation represents a complementary strategy that can ensure spectrum is available to those willing and interested to deploy networks in underserved areas. It is not that dynamic spectrum should replace traditional spectrum licenses but rather that we need both approach.

The Summit also made it clearer than ever to me just how important it is for regulators to not let regulatory process drag on.  Both access service providers and manufacturers need clear and confident signals from regulators into order to commit investment.  Many of them simply do not have the financial resources to wait years for regulators finalize regulations.  Most countries have policies that encourage the growth of small to medium size enterprises (SMMEs) yet this is one area where they are failed by regulations.  The high cost of spectrum has reduced market permeability and essentially firewalled SMMEs from competing with mobile operators except through the use of unlicensed (WiFi) spectrum or fibre.  SMMEs bring innovation and fill market gaps not addressed by large operators yet we don’t have spectrum regulation to enable them.  Dynamic spectrum is part of the solution.

—
Thanks to ISOC,NSRC,and Mozilla who all contributed in one way or another to my being there.

As a summary of the event I am missing out a large part of the event that focused on the evolution of 5G, on mmWave technologies, and the development of 6GHz as an unlicensed band but that will have to wait for another post.