TV  White Space (TVWS) technology and regulation has its roots in the United States in the early 2000’s where there was an emerging sense of the growing impact of wireless technologies designed for unlicensed (ISM band) use as well as a recognition that manufacturing costs were coming down substantially.  Low-power use of unused guard bands in the VHF and UHF television frequencies seemed to hold potential for the expansion of unlicensed approaches, with regulation encoded in the device itself rather in legal license documents.  The original conception of TVWS was that it would operate on a spectrum-sensing basis, immediately vacating any band where television broadcasts were detected.  However, that idea received a fair amount of pushback from incumbent broadcasters who were concerned about potential interference with television broadcasts.  Even more strident in their objection to TVWS were the wireless microphone manufacturers and their consumer base.  Wireless microphone manufacturers and popular religious ministries that used wireless microphones weighed in on the issue.  Even country music star Dolly Parton came out vocally against TVWS.  In other words, things got political, and they got silly.

Lobbying from anti-TVWS groups pushed the tolerances for spectrum sensing and responding required by the  Federal Communications Commission (FCC) to a point where it was going to be difficult to manufacture compliant TVWS equipment affordably.  This led to a compromise scenario in which a database solution was proposed.  A geo-location authentication database would map the existing use of spectrum by television broadcasters and each TVWS device would check in with the database before turning on its radio to ensure that it would not interfere with existing broadcasters.  This was not the preferred outcome for TVWS advocates who wanted to enable the same kind innovation in TVWS that the world has seen with WiFi and Bluetooth.  However it was a compromise that worked and in 2010, the FCC enabled TVWS regulations.  The United Kingdom followed suit a few years later with regulations issued by the regulator OFCOM.

One might imagine that that would have unleashed the hoped-for innovation, that large-scale manufacturing would ensue and a huge new market for connectivity devices would be catalysed.  However it was not to be.  My interpretation of why the TVWS has failed to grow goes something like this:

It is difficult to point to a single overarching cause. Whichever the case, TVWS has yet to take off as an access technology on any sort of scale.  Yet the potential for its application only grows as manufacturing and acceptance is growing, slowly but surely.

Meanwhile in Sub-Saharan Africa, the potential of TVWS as an access technology has not been lost on advocates of affordable access.  There have been more pilots in this region than anywhere else in the world and for good reason.  African markets for TVWS  are significantly different from the US and the UK for a number of reasons:

This makes something of a conundrum.  TVWS technology, which seems to hold so much potential for the region, is stymied by its relative novelty and its complexity of implementation.  Geo-location databases in particular present an implementation challenge as they are a new thing from a regulatory perspective.  Implementing them requires both resources and a level of confidence that one is doing the right thing.  For regulators of many African countries, there are simply too many other priorities to be able to devote the time and resources into implementing something like this, even with the best will in the world.  This may be why the African region and Southern Africa is particular has the highest density of TVWS pilots in the world but very modest follow through on regulation.  South Africa is the only country in the region to have published TVWS regulations but, even there, a commercially  available geo-location database is not yet available to would-be implementers.

One might conclude from the above that a geo-location database for TVWS is simply not the best option in African countries.  Indeed, countries like Malawi and one or two others appear to have come to this conclusion in that they are simply making administrative assignments of TV spectrum to particular companies that promise to implement TVWS rollouts.  But maybe there is a better option…

In the African region, sub-regional regulatory associations such as CRASA in Southern Africa, EACO in East Africa, and WATRA in West Africa have played a critical role in capacity-building with national regulatory bodies and with catalysing the harmonisation of regulations across member countries.  Why couldn’t a regional regulatory body play host to a TVWS geo-location database that served all members countries?  Each country could have a unique country portal but be served by a single database service.  Here’s why this might be a good idea.  It would: 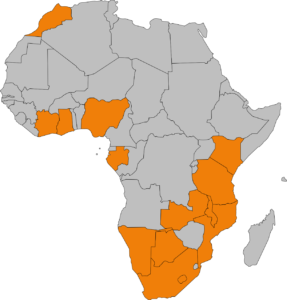 Perhaps most important and exciting is the fact that it would change the game, putting African countries in the forefront of  the implementation of TVWS regulations globally.

A regional TVWS geo-location database would not be hard to implement.  A tender could be issued in the name of the regional regulator for a two-year contract (renewable) to provide TVWS geo-location database services to the region.  It is quite possible a funder could be found to de-risk even this for say an initial two year period.  Member countries could test, validate, and implement services at their own pace.  Each member country success would reinforce the efforts of other member countries.

Regional regulatory bodies seem like the natural place to start because the number of member countries is small enough to build consensus and adopt a practical approach but large enough to realise coordination and cost-saving benefits.

It is a foregone conclusion that ultimately software will do more management of spectrum in the future than people will.  TVWS is a great opportunity to explore this potential in a manner that is low-risk for regulators.  From a risk perspective TVWS is great option for regulators. The secondary-use nature of TVWS which must always give way to the primary spectrum license holder, combined with the geo-location database control means that regulators are placing the risk where it belongs, in the market. If TVWS takes off as hoped, that will be amazing, but if it doesn’t the regulator hasn’t committed a band to its use for 10 to 15 years as it would have with a traditional primary license.

Implementing a geo-location database as a regional strategy reduces the risk even further and would establish African regulators as true pioneers in dynamic spectrum regulation.