A Better Approach to Zero-Rating 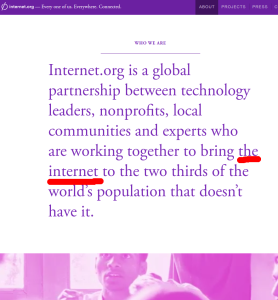 Yesterday, Internet.org announced that Kenya would be the third country in which they launched their Internet.org application,  an app that offers free access to Facebook along with a selection of  other services.  In Kenya, this includes Wikipedia, Daily Nation, SuperSport and BBC News.  Google search, which was included in the Zambian version of the app, is notable by its absence.  I doubt there is anything sinister in Google’s absence, it probably has more to do with the fact that zero-rating search may not be very satisfying  for users as your very next link is a paid one.

However, it does dislodge even further the figleaf of “Internet” from the Internet.org app.  There is nothing terribly Internet-ish about this app.  In their defence I still think this is better than unaffordable Internet access and have argued as much.  And you can’t fault Facebook for promoting their product.  However, this is not being rolled out by Facebook, it has been developed and promoted by Internet.org which has the self-professed goal to “bring the internet to the two thirds of the world’s population that doesn’t have it”.  They did say Internet not Facebook…. in very big letters on the website.

If this is truly their goal, then I think a more interesting approach to zero-rating would be to convince a Mobile Network Operator (MNO) to generically zero-rate 2G services. This is not as revolutionary an idea as it sounds.  In the United States, mobile operator T-Mobile already offers free 2G access to their roaming customers.

This would be a more egalitarian approach to zero-rating that would benefit all content and service providers equally, as well as give them an incentive to make their apps as slim (data-consumption-wise) as possible.  It would help the Internet do what it does best which is to exist as a fitness landscape for new ideas.

I suspect that this would benefit MNOs as well, who have likely already recouped their investments in 2G networks, by spurring adoption of 3G access as more people begin to value online services. Governments could get in on the act by offering flat incentives to operators to zero-rate 2G.

I don’t have the mobile network investment or usage data to back this idea up but I would love to see a debate that digs into the feasibility of this idea.