The Internet Is U-Shaped

When we think about the problem of achieving affordable access to the Internet for all, the discussion often focuses on broadband targets.  These targets are moving goalposts as infrastructure improves.  Broadband used to be defined at 256Kbps, now it might be 2Mbps or 5Mbps or something else depending on who you talk to.  Nobody wants to be seen as providing second-class broadband to their country.  And yet, the higher we set our targets for broadband, the more ambitious those goals become.  This is particularly true when we are talking about rural regions with variable population distributions with low ability to pay.  I have come to wonder whether simple broadband targets are the right strategy.  Perhaps we need something more nuanced.

First I want to suggest that slow Internet is still extremely valuable Internet.  Only very modest speeds are required for the basic operation of enormously population messaging services like WhatsApp, WeChat, FB Messenger, et al.  The growth of those services in the last few years has been nothing short of phenomenal.  It is with that in mind that I along with Steve Esselaar and Christoph Stork have been pitching the value of making 2G Internet access available for free to anyone with a data-capable phone.  You can read more about that idea at Zero-Rating: A Modest Proposal or watch the 10 minute pitch I made to the Mozilla Equal Rating Challenge last week.

And of course, 2G, while essential and extremely valuable, is not enough.  That got me thinking about where the value really exists on the Internet.  And for me the other place of high value exists at either end of the broadband spectrum.  I value small amounts of bandwidth for texting, emailing, etc and I value video, more specifically I really like YouTube.  I don’t like singling out a particular platform but no one else is delivering value the way YouTube is at the moment.  And at the low-end of the value proposition somewhere are top-heavy news sites like CNN.  I don’t mean to pick on CNN, there are hundreds like them; sites that deliver 20KB of reading material while taking up 5MB of capacity.

A word about YouTube.  I think YouTube is one of the pedagogical marvels of the decade.  There is virtually nothing you can’t learn to do on YouTube whether it is learning to be a carpenter, to fix your car, to write music, to be a magician, to fix electronics, to dance, to understand particle physics, the list is endless.  Chris Andersen of TED understood this six years ago in his talk on how YouTube is driving innovation. But it has gotten even better since then. Nadiya Hussein, who won The Great British Bake-off in 2015 is credited with learning to cook via YouTube videos.  Examples like this are legion. In communities where no affordable broadband exists, people travel to areas with free or cheap WiFi just to download YouTube how-to videos to take back to their communities.  Some even take requests.  I see this as well in my sons who are between ages 11 and 12.  They acquire skills on YouTube that frankly amaze me and they put more effort into learning there than they do in school because they are tapping into what they are passionate to learn about.  YouTube is also valuable because it bypasses a lot of local language and literacy challenges by allowing people to express themselves directly.  It’s not a panacea in this regard but it is a real vehicle for local expression.  Again I want to emphasise that it is not YouTube in particular that I am advocating for but the value that YouTube is providing right now.  What it might be in the future is another thing entirely.  Platform diversity is just as important as content diversity. 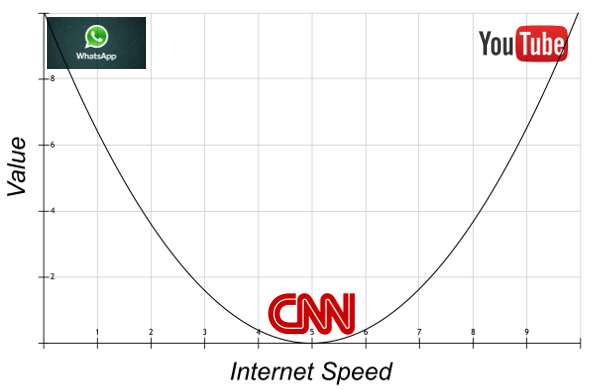 So if I can’t have the whole Internet, or if I have to decide what I get first, I would choose slow and fast Internet. My graph of Internet value vs speed looks something like this one on the right.  If my value framework is true, does that tell us something different about how to prioritise the development of Internet infrastructure?  For my it places a clear emphasis on getting everyone at least 2G access to the Internet but what does it mean we should do at the other end?  Conventional wisdom says invest in more broadband networks, 3G, 4G, 5G and so on.  In the last year WiFi networks have come to challenge that orthodoxy in Sub-Saharan Africa but, with a few notable exceptions, they tend to thrive in urban areas where there is existing high-speed backhaul infrastructure.  Getting YouTube or Vimeo or other video platforms to sparsely populated rural areas in an affordable manner is a real challenge.

That is why I am so excited about a pilot project that Google have in the Philippines called Google Accelerator.  Yes, not the catchiest name in the world but still an amazing project.  Google Accelerator is what I would call a micro Content Distribution Network (CDN).  You’ve heard of Akamai, CloudFlare, Google Global Cache and other CDNs that work at the network operator level and provide national-level caching for petabytes of content.  A micro-CDN works at the small organisation level.  Imagine a TV set-top box that is WiFi-enabled.  Now picture it with a 4 terabyte drive that is packed full of YouTube videos.  Anyone who connects to the WiFi access point of the set-top box gets instant high-speed access to YouTube.  Suddenly the high-value end of the Internet is available anywhere.  Of course the videos need to be regularly updated and that is challenge.  The ingenious part of Google Accelerator is that the content is refreshed via DVB satellite.  Pretty cool.  Google Accelerate is also remarkable because the solution is very affordable.  The components are commodity devices that might cost a few hundred dollars in total.  The challenge lies more in the refresh of the devices and what that costs.

Google aren’t the only ones who get the value of micro-CDNs.  Kenyan startup BRCK also seem to have pivoted to a content-based strategy in which their latest WiFi device the SupaBRCK which also has a hard drive specifically for local caching of Internet content.  This doesn’t mean there aren’t challenges.  Platforms like YouTube and others can be particular about allowing anyone else to cache their content.  Coming up with a licensing strategy that allows for independent micro-CDNs may be necessary.  Also, the trend to HTTPS encryption for all websites is a factor.  HTTPS encryption is great for blocking casual surveillance by bad actors but presents challenges for CDNs that can’t see what content is being browsed in order to cache it.  Large CDNs like Cloudflare solve this by decrypting and re-encrypting traffic as it passes through them but it is likely not the simple for micro-CDNs.

So what do you think?  Is the Internet U-shaped in terms of value vs speed?  Does that suggest different ways of prioritising infrastructure development?  This article was written partly as a provocation to test this idea that has been growing on me for a while. I’d love to hear rebuttals, affirmations, and/or alternative theories.