NextFibre And Other Laws of Infrastructure
Net Neutrality

Imagine a world where all phones were automatically connected to the Internet, at no charge. Is this an idle fantasy?

The current worldwide debate about Zero-Rating and Network Neutrality has brought the issue of affordable Internet access into sharp relief.  I recently came back from the Internet Governance Forum (IGF) in Brazil where there were no less than seven sessions on Zero Rating and Network Neutrality.  Internet.org, now renamed as Free Basics, continues to be a subject of often emotional debate as to whether it brings greater benefits or harms to those who use it.

This has got me thinking about how we value the Internet and how fast the Internet needs to be in order to qualify as ‘enough’.  In one of his sessions at the IGF, Vint Cerf pointed out that we use the word Internet as if it meant the same thing to everyone but this isn’t really true.  A feature-phone user browsing the Internet via Opera over a 3G connection does not have the same experience as the San Francisco-based developer on gigabit fibre staring at his/her dual 26 inch monitors.

The “all bits are created equal” debate in Network Neutrality doesn’t really take into account our varied experiences of Internet.  On a personal level, it is clear that some bits are more valuable to us than others.  A one or a zero that indicates whether your loved one is alive is worth infinitely more than four gigabytes of the latest Hollywood movie. 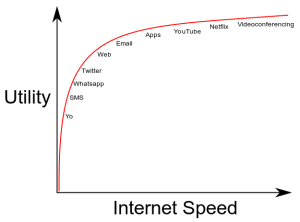 For illustration only. Your priorities and speeds may vary.

This leads me to question the assumption, implicit in most national broadband strategies, that the value of Internet increases more or less proportionately with increase in speed. The reality is that even very tiny amounts of data can be enormously valuable and that the value of access goes up dramatically with even a little access and then tapers off.

From a value maximisation perspective then one might conclude that it is more strategic to make a priority of ensuring that everyone has at least some connectivity as opposed to some percentage of the people getting fast Internet.

This got me thinking about the spread of mobile telephony in sub-Saharan Africa.   The Pay-As-You-Go (PAYG) model implemented by mobile network operators (MNOs) meant that it didn’t cost any money to be part of the network.  All phones with a SIM card automatically register on the network and are callable on the network.  A credit on the network is not required.   Why has this turned out to be a such a phenomenally successful model?  Because MNOs recognised that each and every person connected to the network added value to the network whether they made a call or not because they increased the size of the callable network, thereby increasing value to paying users.  This phenomenon is known as network effect and while it may have been a somewhat esoteric concept twenty years ago when the mobile industry started, it is now well understood by any Internet entrepreneur.

Registering and managing non-paying customers on the phone network is a significant operational and financial overhead for MNOs, especially now with mandatory SIM registration being more common. Connecting phones to the network for free has obviously proven to be worthwhile.  The increase in size of the overall network also helps to transform those non-paying users into paying ones as they see more and more value from the increased number of people to connect to.  It is a positive cycle.

This brings me back to an approach I suggested last year: low-bitrate, generic zero-rating.  What if it were normal for all MNOs to offer low-bitrate, generic Internet access in the same manner that all MNOs connect phones to their network?  Let’s imagine that Internet data were enabled by default for free at GSM (2G) speeds of only 9.6kbps to all users.  Let’s also imagine that it is a best-effort service that might not always achieve that speed or may have terrible latency, a bit like real 2G service.

A million users consuming 2G at a modest 4.8kbps would consume about 4.8gbps per second of capacity.  Looking at the adult population of South Africa of roughly 35M people, if everyone were consuming that data on their phones at one time, it would amount to 168 gbps of capacity across the entire country.    Let’s put this in the context of South Africa’s undersea fibre optic cable capacity, which currently has an aggregate design capacity of 17 tbps, soon to reach 22 tbps when the ACE cable lands.  Free 2G data for all would consume less than 1% of the design capacity of the international submarine cables landing in South Africa.

That is a very rough and inevitably flawed calculation.  It doesn’t take into account whether the existing mobile networks could handle this capacity with their current spectrum allocations and technology.  It also doesn’t take into account backhaul limitations where terrestrial fibre is not available.  But we do know that MNOs are actively investing in upgrading their networks, which would make this amount of data an increasingly small percentage of their network traffic.  But the value to individuals would not diminish.  Generic low-speed zero-rating of mobile networks could have multiple impacts. It would:

[tweetthis]Imagine a world where all phones were automatically connected to the Internet, at no charge.[/tweetthis]I’ve asked you to imagine a world where mobile phones connect to the Internet in the same way that they simply connect to the mobile phone network, where there are no data charges for very low data speeds.  On the surface at least it would seem that the benefits to both the public and private sector would dramatically outweigh the costs of doing this.  If we accept that the value of access is not directly proportional to speed of access and that there is huge value in even small amounts of data access, then perhaps a national strategy ought to focus on getting everyone connected at a modest, free rate as opposed to say 80% of the people at say 2Mbps?

It will take more detailed cost modelling to really dig into this idea but I cannot help but think of more consumer benefits at every turn.  Even for globe-trotting travellers.  Imagine being able to pick up basic text messages and emails as soon as you get off the plane in a new country without having to search for a WiFi hotspot or wonder whether you dare turn on roaming.  Always-on mobile data could open up new possibilities for mobile payment services.

Some operators like T-mobile in the US already offer 2G roaming but only for postpaid customers.  What if it just made good social and economic sense to have basic rate Internet enabled for all mobile phones?

—
Note:  Percentage of total South African traffic should be less than 1 percent not .01 percent as I originally wrote.
Made possible in part through support from the Network Startup Resource Center
Image inspired in part by Metcalfe-Network-Effect