The future is mobile.  We all know that.  We read it everywhere.  In the UN Broadband Commission‘s recently published report entitled, The State of Broadband 2012: Achieving Digital Inclusion For All, ITU analysts boldly announce their belief that:

But what does it actually mean and is it really true?  When talking about our mobile broadband future, it is essential to distinguish between devices and networks.  The two things are not necessarily the same thing.

The Future is Mobile Devices

This future I believe in.  Small, low-power wireless devices whether phones or tablets are taking over the way we interact with each other and with content.  New markets and services are being created every day for mobile devices.  The world of app and apps stores are creating new opportunities for innovation and adding value.

The Future is Mobile Networks

This is the future mobile operators would like you to believe in but the evidence is increasingly not in their favour.  Here are some statistics that may change your perspective of our mobile broadband future. 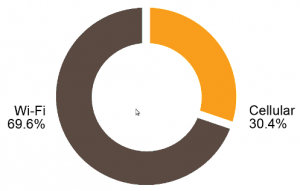 A recent study by Mobidia revealed that about 70% of smartphone data traffic travelled via WiFi and not mobile networks.  Keep in mind that this research was not done in Africa, it was done in the industrialised world.  What we are seeing overwhelmingly is WiFi become the default form of data access and cellular access being relegated to those times when WiFi is not available, an increasingly rare phenomenon in the rich world.

The figures are even higher for tablet traffic.  And while we’re at it, since when are tablets “mobile” devices?  Of the fifty million tablets sold in the United States, only 8% have mobile capacity.  The tablet is not a mobile device, it is a WiFi device.  Google’s Nexus7 tablet is WiFi-only.  Both Microsoft’s new Surface tablet and Apple’s new iPad Mini are likely to launch as WiFi-only devices.  Why would Apple and Microsoft do that?  Well, one reason might be to avoid the painful process of negotiating mobile carrier agreements.  Imagine if computer manufacturers had to negotiate ISP agreements to connect a computer to the net.  The latest tablet is also a whole lot cheaper than a smartphone.  Compare a $200 Nexus7 tablet with an $800 Samsung Galaxy S III smartphone. 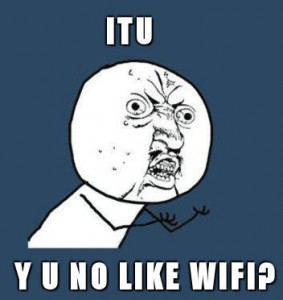 So what’s my point here?  My point is that the UN Broadband Commission’s recently published report on Achieving Digital Inclusion mentions WiFi exactly twice, both times parenthetically.  Mobile operators would like you to believe that the future of mobile broadband lies in the LTE networks that they are building.  And certainly that is partly true but only partly.  If the Mobidia stats are to be believed, about 30% true.

Mobile operators have no interest in WiFi because they currently have no control over WiFi networks although that is beginning to change in the U.S.  And we get reports like the one from the UN Broadband Commission because the dialogue at the ITU is dominated by operators.  The Broadband Commission itself is chaired by Carlos Slim, the richest man in the world.  The irony of putting the richest man in the world in charge of a commission to connect the poor appears to be lost on the UN.

In any discussion about the mobile broadband future of Africa, WiFi is simply not part of the discussion.  Yet the evidence is before our eyes of the strategic importance of WiFi to our “mobile” devices.  It’s cheap and fast and grew to solve the problem of affordable access by chance not by design.  It happened because WiFi is an open space for technology developers to innovate.  No carrier agreements required.

Also not mentioned in the UN Broadband Commission’s report is the potential of Television White Spaces spectrum, a space for with the potential for massive innovation in rural access.  Another area not controlled by mobile operators.

The benefits of WiFi go beyond just cheaper access.  They also create the opportunity to eliminate the weakness of a single point of failure that mobile networks create.  WiFi infrastructure can make it harder to wilfully shutdown communication in a given geographic region.  The key to resilient networks is plurality of access and WiFi is already embedded in every smart device you can think of.

It would be nice to see WiFi recognised for the powerful role that it is already playing in mobile broadband and to see it figure in national strategic broadband plans for the future.